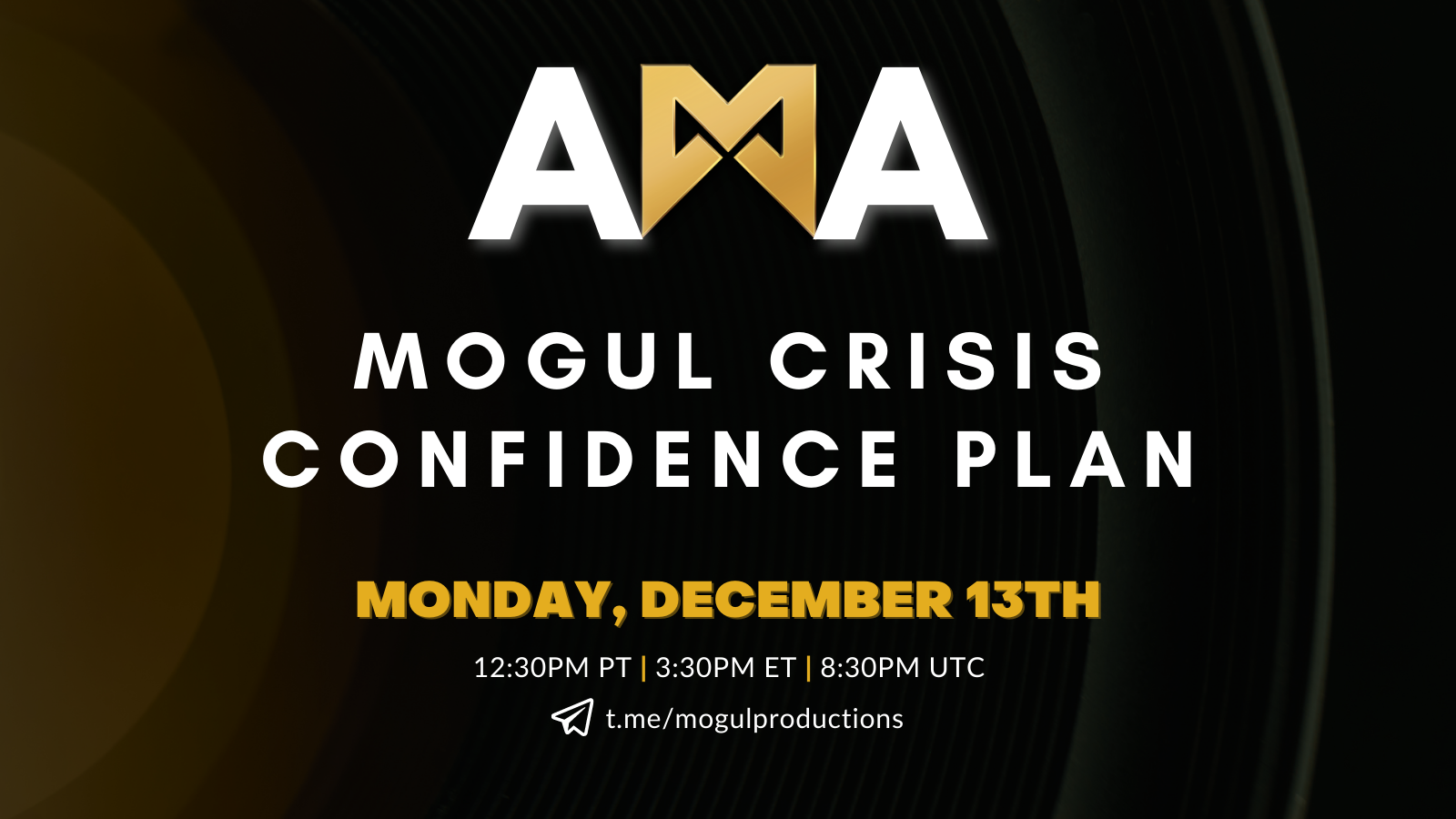 This post recaps the AMA regarding the Bitmart incident that took place on the Mogul Official Telegram on Monday, December 13th.

INTRO: Welcome to the AMA everyone! We’ll be discussing the BitMart incident and our plans with $STARS. Today we’re going to be joined by the Mogul team to answer all your questions.

Mogul Official: Thank you everyone for sending in questions over the weekend. It seems we've had a very positive response from the community on the Crisis Confidence Plan.

For those that have not reviewed the release, please refer to this blog post: https://www.mogulproductions.com/post/crisis-confidence-plan-official-bitmart-statement

Q1 (solmoss): Is there a timeline on the 21 million stars being purchased by Bitmart?

Mogul Official: We have not been sent a timeline. BitMart has told us that they will not run on fractionalized reserves and that every user will be able to withdraw. They've said they're working with a professional asset management team to make this happen.

They have told us that they are already purchasing STARS, which we can see is true because there have been successful withdrawals of about 5M STARS tokens from their platform.

In order for someone to withdraw successfully, they'll need to have the tokens to facilitate it.

Q2 (jbarcel): If the hacker uses any privacy platform out there, like tornado cash with stars, how is the team going to track the hacker’s wallet address?

Mogul Official: It's not our responsibility to track the tokens after that's happened. The hacker moving the tokens through a privacy platform like tornado cash will initiate the Crisis Confidence Plan, in which case we will take a snapshot of our holders the block prior to them moving tokens and issue a V2.

We've thought of every scenario to give people confidence in Mogul and STARS.

Q3 (Jerry Crypto): What is the next plan of action supposing the problem is not handled appropriately by the BitMart administration?

Mogul Official: At this point, we're confident that BitMart will handle the problem appropriately. They have just raised capital at a $300M valuation and like many exchanges, they're cash liquid.

People have already been able to successfully withdraw from BitMart, which indicates to us that they've acquired STARS to make this happen. We have not given them any STARS to allow for this.

We think the risk of that is very low, but our number 1 priority is the safety of our users and if Mogul needs to step in we will, despite this not being our error. We are committed to our community and giving confidence to our fans

We will also not only be dependent on BitMart ERC20 markets moving forward, so our users will have alternatives.

There will be an upcoming announcement on this, but that's not the purpose of today's AMA 🙂

“BitMart has not shown Mogul proof-of-payment to acquire STARS tokens. They have been advised against this due to possible price manipulation.”

Mogul Official: Mogul has asked to see the specific addresses, transactions, and balances of STARS. This has not yet been provided to us, but the successful withdrawals show that they've happened and are happening.

BitMart stated last week they are not providing projects with info on "how" they are acquiring the tokens and through what methods and on what chains. We suspect this is because they're working with a professional asset management team who's helping them to acquire STARS at the best price they can to minimize the total cost of making their mistake right with the 45 impacted tokens.

This is an incident that spans 45 projects - not just STARS - and many of these projects have much more infant markets.

There is a chance that communities could increase the price or track their addresses on dex's to front-run their orders and things like that.

It seems prudent with the many variables they are dealing with to quietly acquire these STARS (and the other 45 tokens they'll need to require) without having to worry about the possible game-theory outcomes of letting everyone know exactly how they're doing it.

The importance for us is that they're staying true to their word on making sure our users are able to withdraw from their exchange. As long as that is happening, we are happy and our community should be too. We are not giving them the STARS, so they will need to acquire them.

Mogul Official: Yes. More on this soon. We're not in the business of announcing things before pen meets paper.

Mogul is a long-term project and the reputation of our business is important in negotiations. It's not good practice to leak these discussions.

Q6 (Tarik Ceek): Do you have backup plans to protect the price and the investor many people are at a loss right now?

Mogul Official: Thanks for the question Tarik and thanks for joining us.

Price is a factor of many things. We don't talk about price in this channel, but it's my personal opinion that there was fear in our community when this hack occurred.

The hacker did not sell the 19M tokens, but there was fear that they "might" sell, so many community members got scared and sold their tokens.

Our priority right now is to make sure there is confidence. There is no fear. That's why we have put together the Crisis Confidence Plan - to make sure that our community is safe, protected, and has widespread use cases for their STARS tokens and no longer need to worry about the hacker.

I hope that this action plan, the way that we are responding to BitMart's error, and the future utility and use cases for STARS in our community (metaverse, NFT marketplace, Mogies, etc.) will be very good for our entire community!

Q7 (jinxed): So is that true what I understand is Bitmart has to buy some STARS tokens from the market?

Q8 (Parzival): Hi, I've been researching Mogieland for days :) but I couldn't come to a conclusion whether a park will be established or land will be sold, or will you buy a land in ceek venues with your partnership with ceek and open an office there.  what's the status?

Mogul Official: Right now we're partnered with CEEK and have the Mogie theatre there in their metaverse.

We have been building Mogies in a technical manner so that they are "built for the metaverse" in the future. Basically making sure that they are fully 3D, rendered, etc., and have their entire body structure.

We are making a 1 min hype video for Mogies with our animation partners and chose to do so in a "forward-thinking" manner so that the background of the promo video is already built as the potential future metaverse for Mogul.

If there is a lot of interest from our community to have a Metaverse specific for Mogies we will potentially add it to our roadmap and it will be faster than other projects due to the work we're doing now.

Q9 (erso): How is the partnership with ceek going? New projects together, when can we hear new news?

Mogul Official: We talk with CEEK and Jarred Winn every week. We're very close to them. The partnership is excellent!

We actually met with a celebrity here in Toronto on Saturday with who we will be doing activations with and he has a lot of interest in the metaverse and Mogul. He was playing a show at the largest performance venue in Canada and we had a sit-down meeting with him prior to the show.

Q10 (Night Stars): The STARS value must correspond to the crypto value of the withdrawn money, otherwise the stars can be doubled while there is value in the market cap. Has a solution been presented for this?

BitMart needs to buy STARS. We're not selling them to them. Therefore, they have to purchase them from another person (i.e. on the market).

Price is a function of all the buying and selling that occurs. I can't predict the price for you.

Q11 (S H H A B I B): Your project name seems to be very interesting. Does it have any story behind it? Can you share us with the inspiron for approaching to this name?

Mogul Official: The definition of Mogul is an important or powerful person, especially in the motion picture or media industry.

We are all moguls in our community because we are decentralizing Hollywood and making us all-powerful.

Q12 (KOLPONA1 akana 22): STAKING is one of the STRATEGIES to ATTRACT USERS and HOLD Them for the long term. Does your GREAT PROJECT have a plan for staking?

Mogul Official: Yes, we have great partners in ApeSwap and Beefy Finance that allow for staking. We also have a strong pipeline of projects that are approaching us to give more staking options

Q13 (KOLPONA1 akana 22): AUDIT plays an IMPORTANT role in enhancing the stability of any PROJECT. Do you have AUDIT CERTIFICATES? Or are you working to AUDIT your project to make it more secure and reliable?

Mogul Official: All our smart contracts are audited by the best firms in the industry and the public audit reports are displayed in our GitBook. Here's the link to all our audits! https://mogulproductions.gitbook.io/mogul-productions/security/audits

Mogul Official: Mogieland will be the future Hollywood metaverse. We need our community to show they want us to build it!

Mogieland is basically Hollywood Boulevard of the Metaverse. Picture a place where you can buy a Hollywood STAR and own the shops on Hollywood Boulevard and the prestigious theatres. Or even the Hollywood sign! And take your Mogie around and engage in it with other community members and tour around.

The Hollywood sign in Mogieland is of course MOGIELAND.

Hollywood is one of the highest tourist destinations in the world. Mogieland can bring that experience to the Metaverse.

All Mogie characters depict Hollywood characters. 1923 of the top characters in the last 100 years (when the Hollywood sign went up).

CONCLUSION: I would also like to hear from our community what they want to see in Mogieland and the things they will want to use their Mogies for.

Of course, Mogies are only purchasable with STARS. And STARS are the official currency of Mogieland.

If there are no other questions about the BitMart hack or the Mogul Crisis Confidence Plan, we will end the AMA but our community managers are here to answer anything else.

To recap, our community can feel safe being part of Mogul and STARS due to the Crisis Confidence Plan. Now we move forward as a community and go to the STARS together!!