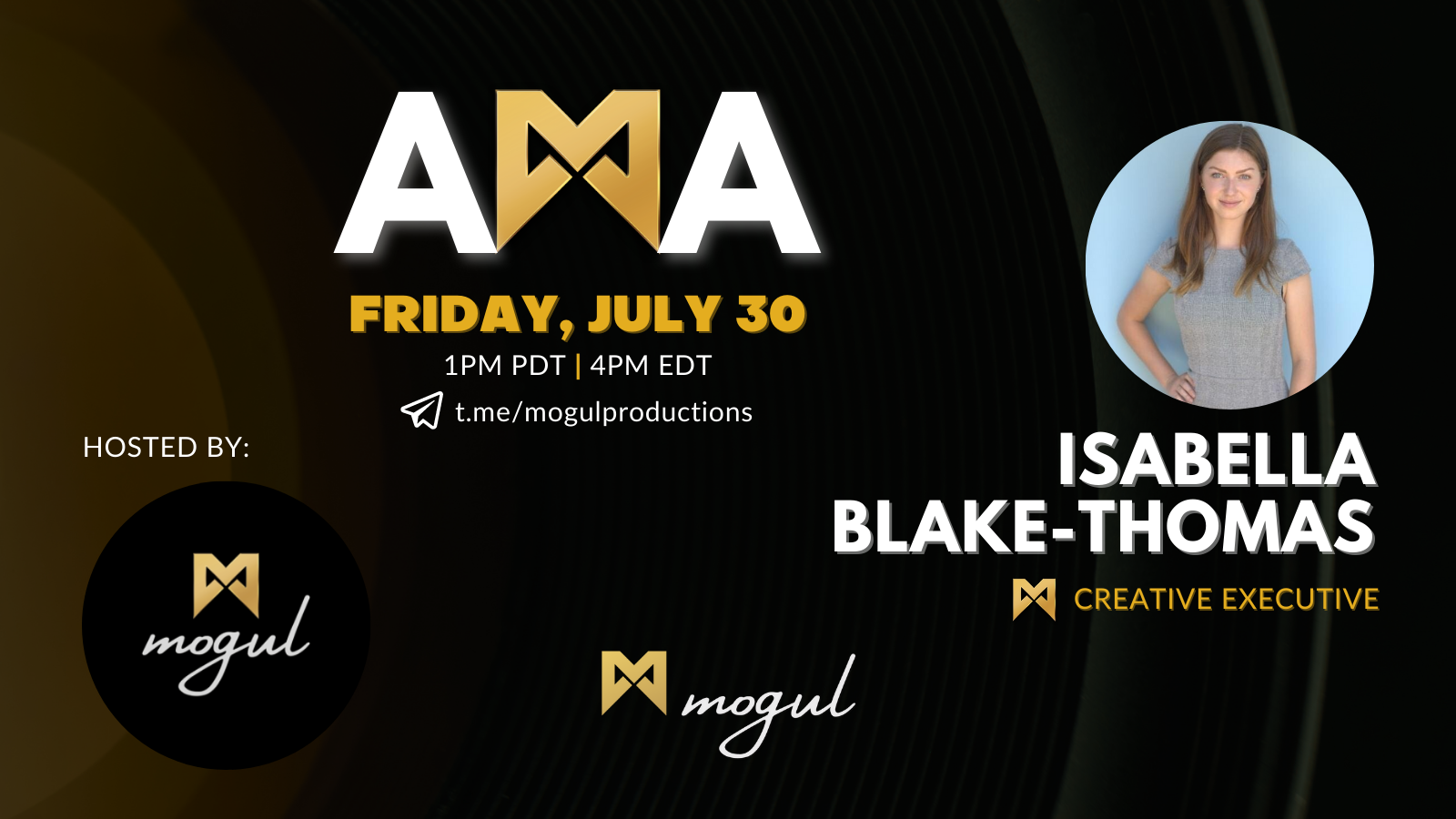 This post will recap the Showcase AMA with Isabella Blake-Thomas, Mogul’s Creative Executive, that took place on the Mogul Telegram channel on Friday, July 30th.

Question 1 (@MarkFacebook) - What does your role as Creative Executive at Mogul entail?

Answer: Mogul hired me to be the bridge between the film industry and the crypto community. Based on my experience as a producer and actress and having been in the industry for 14+ years, I’m able to use that knowledge to help connect the two sides. On a task basis, I read incoming scripts (helping to decide what gets sent to Paul, Gorav, Cindy etc), I’ll be working with and liaising with each of the different groups involved with each film on the showcase and help to bring the immersive experience from the film industry to the Mogul community and Access Pass holders through all sorts of different engagement activities.

Question 2 (@defiapez) - The showcase is starting in a week today. When can we expect more details to cast our votes?

Answer: We have a full marketing calendar with exciting things for you all that we are following in order to keep everything moving. With Mogul we’re trying to standardize a process of bringing community to filmmaking and it’s something that hasn’t, up until this point, played a role in Hollywood; which is what Mogul is trying to change and put everyone in the director’s chair! There’s a lot of coaching and working with the filmmakers to teach them and help them take part in activities that help build community. Many of the filmmakers are unfamiliar with Telegram or even how to engage with the crypto community so we are helping to educate them and bridge that gap.

Question 3 (@defiapez) - In weighing the movies that got into the showcase, it sounds like many factors were looked at. How heavily was the production team's willingness to engage with the community weighed in the decision making process of who gets into the showcase?

Answer: You’re right! A lot of factors were considered for this round of the Showcase. The coverage requirements we were looking for were to have 50% of their total equity financing in place, A-List on-screen talent, experienced directors and producers, distribution deals imminent, and a commercially appealing storyline. There were a lot of projects that we reviewed and we wanted our “coming out party” in Hollywood to be with a movie that was incredibly well-respected and had a very very good chance at succeeding on a global level. We also wanted films that were ready to shoot so that the community wasn’t waiting years to see the results of their vote come to life! Part of the contractual agreement to work with Mogul and be financed through the Mogul platform is to engage and work with STARS holders, Mogul users, and Access Pass NFT holders to provide an engaging experience for everyone involved, so yes! This was certainly considered and will be happening!

Question 4 (@jbarcel) - What is the main audience that the three movies are targeting? And what will be the age restriction that may be tied to the movies?

Answer: The main genres being horror and action; the primary audiences will be the groups linked to those genres. If you look at comparable films to ours; James Bond, It, John Wick, Jason Bourne etc the audiences for those movies became a global cult following as is the hope for our projects. As for the ratings, it’s hard to say this early on because it all comes down to the final edit. What language was used, what visuals are portrayed. My guess is PG-13 or R. Mogul is a global project so it was very important to choose films that would have commercial appeal globally.

Answer: Bungalow Media is the rebranding of Phillip Goldfine’s company Hollywood Media Bridge. Collectively, the producers have made over 200 films so far. Mogul read many incoming projects for the showcase and it just so happened to be that Bungalow had the best 3 projects. They were not the only production company that sought to be included in the Mogul Showcase. A production company is the group that hires the Director, screenwriter (if not already on board), casting director to find cast etc. We think that, as a side effect, Bungalow should be able to provide a long term partnership with Mogul to ensure we have a very strong pipeline of movies available to us through their network, but of course we are (and have been) building relationships beyond just one production company.

Question 6 (@MarkFacebook) - Is it possible for independent films to be profitable if they are solely distributed through streamers? And how do the streaming companies pay for an independent movie that they want to add to their catalogue - do they make a one-off payment upfront, or do filmmakers get paid per stream, like how Spotify pays musicians?

Answer: Yes, it is definitely more than “possible” -  in fact you do make profit from films being released on streaming platforms regardless of the movie’s size. It’s all dependent on what the contract is. In some cases, the streamer will purchase the film for a flat fee, in others, the streamer would pay for the film as it’s being watched. If the contract states that the production company will earn as it’s being watched, then the streamers tend to pay on a monthly/bi annually basis. It’s all dependent on the contract. At a time when there are so many streamers competing for eyeballs, independent films can often have an even better chance at profitability by selling to a streamer. Streamers really want to have more titles on their platform that are appealing to a global audience; especially a film that is generating buzz even well before being sold commercially, which is certainly one of the goals with Mogul’s process!

Question 7 (@jbarcel) - What are the steps today that a film director (or other position more appropriate for that role) should take to finance their film in the traditional market and what would be the steps today with mogul ? How could Mogul bring gains for both sides ?

Answer: On a standard film where the director is not a producer, the producers are the ones looking for financing. The steps change depending on the project. It can be different each time. Generally there are specific companies that make money in order to finance films. In other cases, it might be one singular person who just happens to have that money. As for Mogul we are another form of financing that is available to projects. We can work with other financiers as long as the productions meet our criteria (previously mentioned), but also for community engagement for STARS holders and Mogul users. Equally important to us are the benefits that a film can have for our community.

Question 8 (@defiapez) - When the showcase ends, what is the next step for each of the films? What is the plan to bring access pass holders into an immersive experience? Will there be unique NFTs? How do NFTs play into the strategy of choosing the films that will come into the showcase?

Answer: After the showcase we will be going into production. This includes finalizing locations, cast, final script changes etc. Throughout the process we will be getting content to bring to you all so you can stay up to date with everything. The NFTs from production have yet to be finalized, but the expectation is that movies we are in production with will be working with us to launch exclusive NFTs. Each movie we work with knows about the core values of Mogul and they're all aware that NFTs play an important part in the Mogul ecosystem. NFTs are an important part of these conversations with filmmakers coming to Mogul! We’ll soon be announcing more

Question 9 (Niche) - Hi Isabella. Just out of curiosity. What do you think will be the biggest challenge in your career being Mogul's Creative Director?

Answer: I'm all for challenges, but the biggest one I'd say will be helping to decide which scripts get sent on to Gorav, Paul, Cindy etc. I have to take into consideration all of the requirements from Mogul but also the ability and knowledge of the writer

Question 10 (@jbarcel)- Hi Isabella, with your experience in the film industry and also having been an actress, what could Mogul do or improve to awaken the interest of famous directors and actors to be part of it ? And would that be something you intend to do?

Answer: ​​​​One of my goals at Mogul is to help establish more relationships with film industry professionals, therefore bridging the gap between film and crypto. As I work more with Gorav and Paul, we'll be diving deep into ways we can strengthen the bond between both sides

Question 11 (@AbiWimalaweera) - Do you tell us more about the film that received the most votes on Blockchain? How can we get ahold of a copy of the movie? What made you decide to invest in a project like this? What kind of preparation is the Mogul team putting in to ensure the success of this film? What other film genres can we expect from Mogul productions aside than this one?

Answer: As for watching the movie, once it has been completed and the distribution deals have been done, we will be announcing to the community where they can be watched. Mogul takes into consideration a lot of factors when choosing the projects for the showcase, as previously mentioned. We are not pigeonholed into one genre so you can expect to see a variety of genres in the future

Question 12 (@Shabbir30260554) - What are the ways in which MOGUL ensures project transparency? Will it be made public, and will a third-party audit of the project's progress be conducted? So, how far has the group progressed? Could you tell the rest of us a little about yourself?

Answer: To answer the second half of your question, I've been in the film industry for over 14 years. I started as an actress and added in producing shortly after. I've worked with companies like Disney, Nickelodeon, Showtime etc and have knowledge from both sides of the camera

Question 13 (@Safalkhan11) - Apart from the movie industry, any plan to go for the music industry and video?

Answer: ​​That's a great question! I don't know as of right now about the exact plans for music but it's something the team and I will be talking about as another way to bring the entertainment industry closer to the crypto community