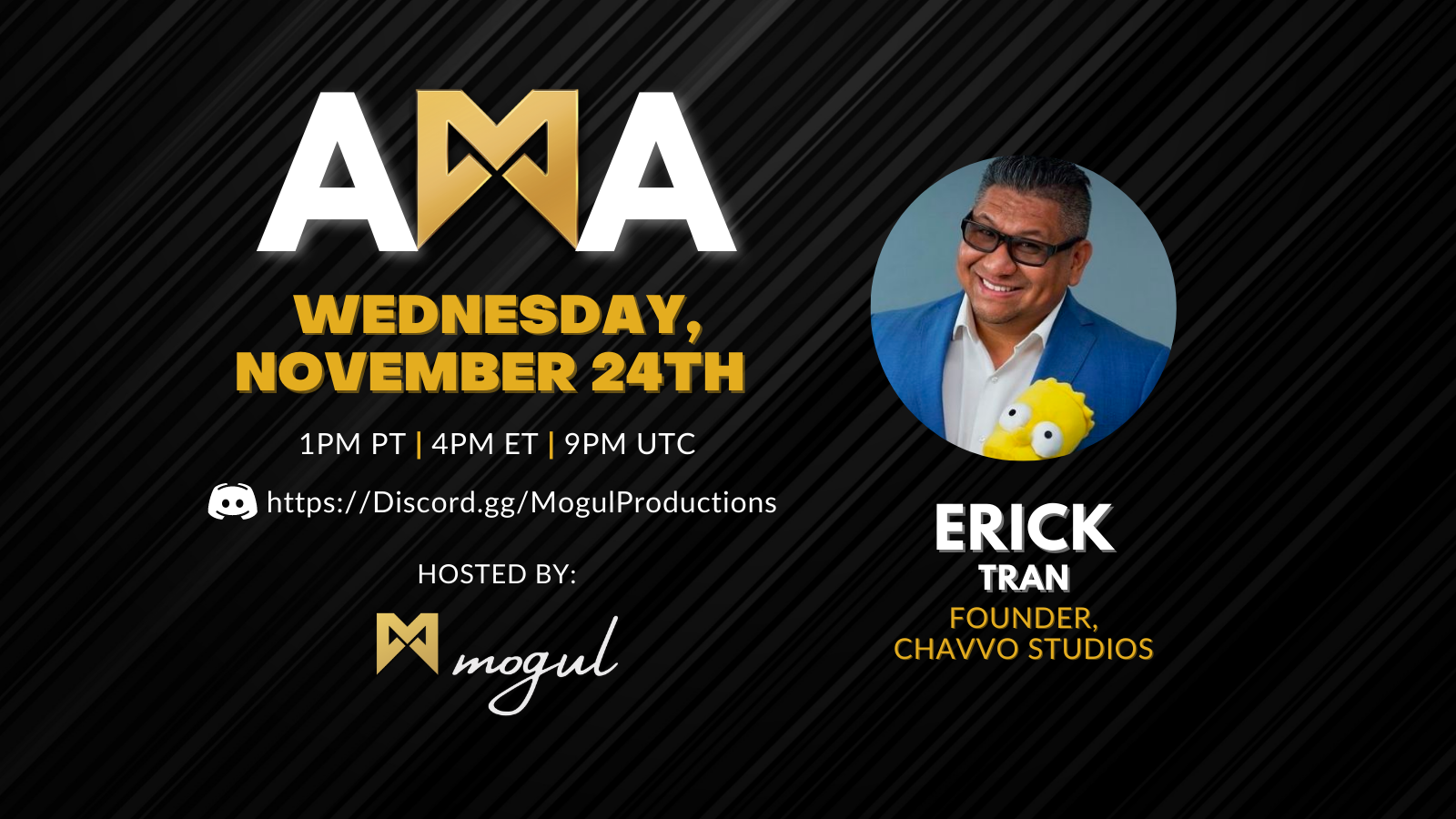 This post recaps the AMA with Erick Tran, Founder of Chavvo Studios that took place on the Mogul Official Discord Server on Wednesday, November 24th.

I’d like to welcome (Erick Tran) to the channel. It would be great if you could introduce yourself to the community. 🌟

Erick Tran: Absolutely, so basically worked on The Simpsons since 1996. I started as an animator and was then promoted to assistant director in 2002. I supervised on the Simpsons Movie and then worked with Universal Studios Simpsons Ride. Hopefully, have some fans here? Lol

Thanks for that, great to have you here! I'm a huge fan! Spider piiiig! LOL

Erick Tran: Now, I dedicate my time at CHAVVO animation as CEO, director & producer. We have creative teams in 5 countries so it's pretty cool.

Question 1 (@MageFrost): How did your relationship with Mogul begin and what aspects of Mogul made you decide to work together?

Erick Tran: Well, it all started with my good friend Cindy Cowan who is an amazing producer here in Hollywood. But seeing what MOGUL was doing I knew it was definitely the right move. I think raising money to produce films and shows through crypto is the future

Erick Tran: No lol, I was like 12yrs old

Question 3 (@Buzzmogie): Please tell us some cool stories about what you may have had a big role in bringing to the show

Erick Tran: Well as you know the character model designs have changed since early years. I was asked to update the Simpsons family model designs to what they are now. It was def a BIG DEAL and honor that they wanted me to do it. That was a loooooong time ago lol

Question 4 (@Barcell1):  It's your first work in the metaverse, how do you feel working with Mogul in such pioneering industry?

It's like in animation. We are creating things that will be released 6-12 months in the future. Though this is our first project in the metaverse, it’s interesting that our years of experience in animation/VR/CG etc has prepped us for this

The MOGUL team has been amazing. I hope to visit soon in their fancy private jet haha

Question 5 (@Sol): Can you give more detail on the rendering process for Mogies that makes them unique?

Well.. it is a long process where each MOGIE is digitally sculpted. We start off with our 2D design team, once designs are approved then in goes to CG. We apply textures and other magical stuff to bring them to life

It's an 8 step process. They aren't automated through AI by any means so it's special

Question 6 (@Sol): Which Mogie is on your personal wishlist?

Erick Tran: Ohhhh boy! if I say will I jinx it? LOL

But... if this is the place to spill the beans and get real insight (so) here's a lil secret… Fresh Prince was the first Mogie created. SHhhhhhhh 🤫

2nd created was Leonardo - Wolf Wallstreet and 3rd Marlyn Monroe. So there you have it.

Queston 7 (@MageFrost): Can you tell us 1-2 things that non-designers do not understand about the complexities of animation? Or what are some things you wished others will appreciate?

Erick Tran: Well, FYI it takes approx 5mins to draw a good simpsons character pose. Sometimes it requires about 5-10 key poses for just a few sec of animation. There have been scenes that would take an animator up to 1 week for maybe 10sec of screen time depending on complexity.

Not easy on the body for sure but we do it because we love our job.

Question 8 (@jiayi): Can you tell us more about potential future plans for an animated movie / series featuring Mogies?

Erick Tran: OMG! BIG! So FYI, our team comprises of artist & animators that work (not only on Simpsons) but also at Disney, Dreamworks, WB, Cartoon Network, Nick etc… and Universal.

We are ready to go all in with Mogul to produce produce produce. Let's just say it will be all hands on deck. We have 2 top level concept artists that work on Mandalorian, Avengers films, Star Wars awakens; just to give you an idea.

Question 9 (@Sol): What other projects are you involved with beyond the Mogies?

Erick Tran: Doraemon, Attack on Titan, and this other anime called Demon Slayer. Not sure if you've heard of it? It was only the highest grossing anime of all time. 😉

Question 10 (@Buzzmogie): Can you tell us about the Easter eggs hidden in each Mogie?

Erick Tran: Yes, each Mogie has a Mogul Star. Some are apparent some are much more hidden... but it's there.

Question 11 (@Buzzmogie): What was your perception of NFTs prior to working with Mogul?

Erick Tran: NFT is the future and VERY thankful that there's more awareness.

Question 12 (@Buzzmogie): What is MogieLand

Erick Tran: Mogieland will be the digital world of the Mogies. I'm not sure how much we can say but there isn't anything like it from what we've seen so far.

Question 13 (@Buzzmogie): Do you own crypto or NFTs?

Question 15 (@Buzzmogie): What other nft projects are catching your eye these days?

Erick Tran: We are so slammed on Mogies that I haven't had the time to look.

Thanks so much for all your questions everybody, and it's a pleasure doing this AMA with you (Erick Tran). Can you please share your socials so our community can be updated with all your latest projects?

Erick Tran: IG @chavvostudios! Thanks for having us! our pleasure!! 2022 is going to be BIG