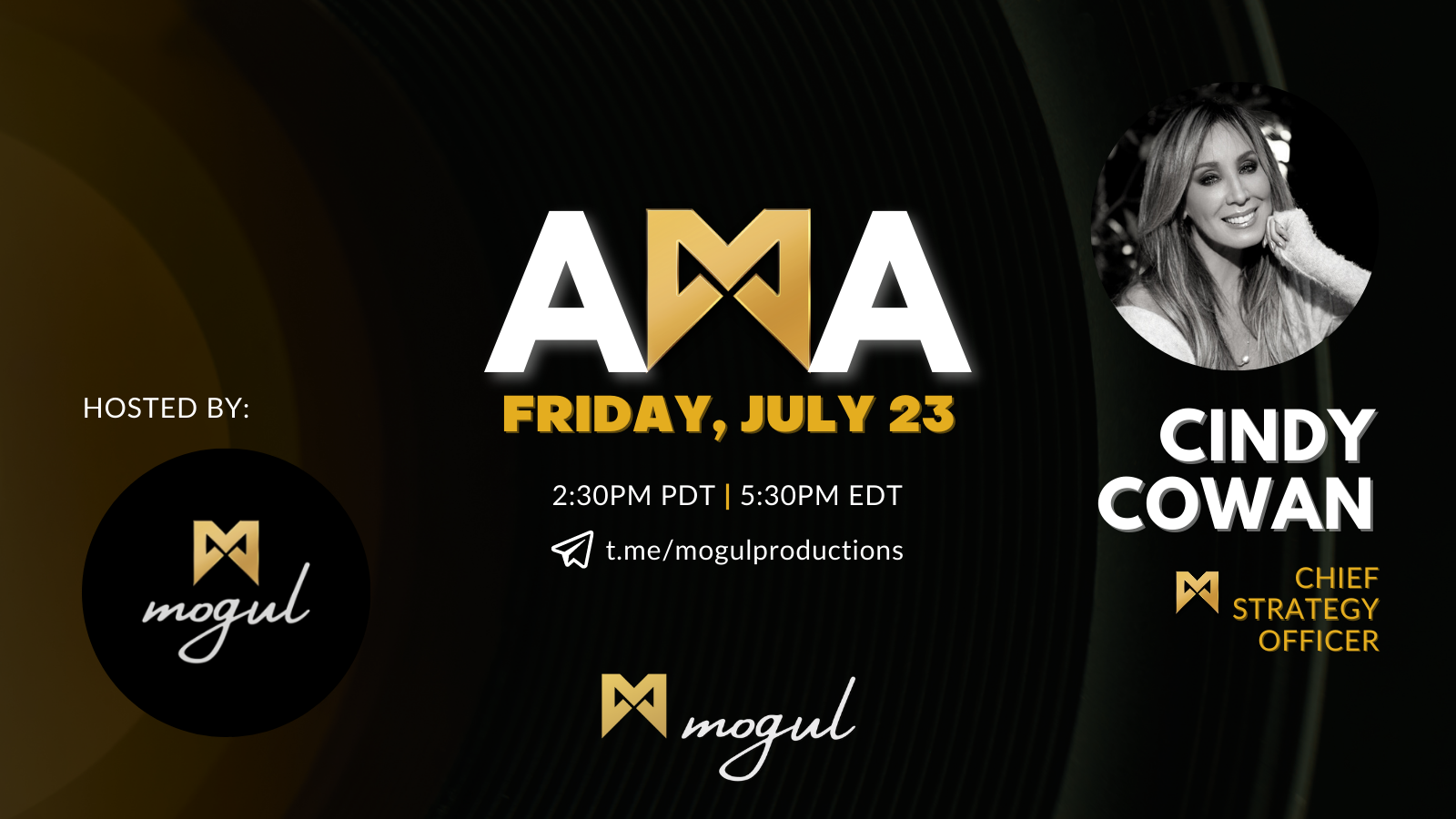 This post will recap the Film AMA with Cindy Cowan, Mogul’s Chief Strategy Officer, that took place on the Mogul Telegram channel on Friday, July 24th.

The Mogul selection process is as follows: Completed screenplays are submitted with at least half of the financing in place, along with budgets, cast, crew or any other relevant details. Once submitted, we cover every script then start to sift through to projects that really stand out.

After we have narrowed them down, each advisor will weigh in on which they believe should be put on the platform. We look for projects that have international appeal and that we feel confident we can get distribution for.

We got very excited about MR-9 because it is based on a series of best selling books with a very James Bond type lead. We believe this to be the first installment of something that can turn into a film franchise. We love the lead character and believe due to the immense popularity of the books and the writing of the script that we will be able to attract a well known name.

There is a director circling this film that has been linked to some of the biggest action films out there. The 2nd lead in this film also allows us to cast diverse and potential and give that character their own franchise. Lastly, we love this script!

Terminal Station is an action film, Action films always do well and this one ticked all of the boxes! This was sourced from a streamer franchise - will have more on this soon!

There is an A-list actor circling this film to play the lead. Again, this film also allows us to work with various ethnicities and backgrounds. We really love this script - it was an absolute page turner!

Devilreaux - We wanted to pick a film in the horror space. Typically, horror films do very well at the box office. Whether on TV or in Film, Zombies typically do very well. We have an actor who is a horror icon circling the lead - which will bring horror fans a lot of joy! We love the setting of New Orleans, we think our Mogul audience is going to think this movie is a lot of fun!

Each project will be put on our showcase for a minimum of 2 weeks, which will allow the voting process to begin. Mogul will be putting up money for films that already have partial financing in place.

The reason we require partial financing is to ensure that the producers and other parties involved in each project have mutually aligned interests.  It not only helps protect Mogul’s interests, but also prevents us from financing projects that are too early-stage (i.e. no final script, etc.).

Once the voting process ends, Mogul will begin putting that film together. We will allow our pass holders to have as much of an immersive experience as anyone in Hollywood has ever allowed!

Every film that is submitted, the film team reviews based on a number of critical elements to ensure the project is viable.  We also negotiate with the producers involved to ensure Mogul is given as much access and collaboration as possible, so we can provide our community with rewards and experiences.  This is done before we commit to even put the films on our showcase.

In addition, we are working with an extremely large marketing company called Optimad. Now that the showcase has been announced, we will start to engage both of these companies to really spread the word and help get Mogul mainstream and industry press.

We have purposely been holding back a little until we put money into our first few films. By financing this first film through the Mogul process, we gain a lot of legitimacy as a business within Hollywood. Now that this is about to happen, we can show Hollywood that we are definitely prepared to put money up and bring Mogul to its optimal fruition.

Now that this is happening, get ready to see many announcements as we bring on directors and talent to announce the upcoming films we will get behind. After these first few films, we anticipate both approaching and getting approached by many top Hollywood players.

We are choosing films that audiences all over the world can connect to! This is very important to us, as it is to most studios and streaming services. Horror, Action, Thrillers and broad comedies typically do the best and are easily relatable internationally. We are open to shooting our films in any country that makes sense for the production.

Mogul will be making movies for a global audience - as such, Action and Horror movies usually have the broadest appeal with the most commercial viability. We will consider projects that can get proper distribution and have the best chances of attracting well-known and established talent.

We can certainly broaden our range of genres, however, if the film project really stands out or tells an interesting or unique story. We will be keeping our budgets at a certain level to begin with given the early stage nature of Mogul, but hope to eventually broaden this as we move forward i.e. higher profile, bigger budget films with higher calibre A-list talent.

I think the use cases of NFT’s in the film business can be endless. Independent producers can turn original screenplays or art into NFT’s to help finance their projects, while studios can potentially turn their screenplays into NFT’s as well, which can generate additional income for everyone.

Imagine having an NFT for the screenplay of a film such as DEADPOOL. In addition, NFT’s can be anything from costumes, music, posters, to a still or animated image. Just think if you had the NFT for the BATMAN costume!

I think Hollywood is on the cusp of utilizing NFT’s in both Film and TV, I believe this to be the future! It helps the creatives involved because it adds a new revenue stream which lowers reliance on conventional means of generating revenue (i.e. box office sales, merchandising, etc.).

We will be looking for projects that we know can find a home, both theatrically and on streaming services. Before moving forward on any project, we will do the same thing that most producers do, by taking a temperature in the marketplace to make sure we land with a studio, mini major or streamer that is looking for this type of project.

Yes, some locations could be delayed. Pre-production, however, on most films occurs several months in advance, so locations are scouted and typically secured during this time.  Given the current COVID environment, productions would likely have more than one option for a location to mitigate risk in the event we lose a location due to COVID.

One of the biggest challenges is trying to secure the crew and coordinate schedules. We are currently seeing this happen now, producers and studios are scrambling to secure top notch below-the-line talent (meaning everyone except the stars and director).

In addition, with so many movies starting production at the same time; it is also becoming increasingly difficult to get some of the larger, well-known actors. The Mogul is working hard with all its advisors and partners to leverage their existing relationships with producers (i.e. such as myself) to return to locations where we have strong contacts.

In regards to the movies on the showcase, it is impossible to say that these projects will 100% go on time due to COVID restrictions and delays. Devilreaux, which shoots in Los Angeles, should be okay pending no cast or crew testing positive for COVID, which is an ongoing risk that can halt any production.

Terminal Station and MR-9, which shoot in exotic locations such as Romania and Bangladesh, could always see delay if those countries should close their borders or require long term quarantine stays.

Covid is tricky for any production or filmmaker to navigate as the various unions have very strict protocols on how and when films can shoot to ensure safety for everyone involved.  Otherwise, producers are taking every precaution they can and planning as much as possible to ensure they can shoot on budget and on-time.

Each project varies based on the script. Anywhere from 9 months on, it is based entirely on the project: Where they are shooting, How complex the script is, How long we need for pre-production, How long we will need for proper post-production. Then depending on whether the film is released on a streaming service or theatrically, it will depend on the window of who bought it for distribution.

We will release more information about future showcases as soon as we know!

When it comes to budgets, there are numerous checks and balance systems used. For example I always make sure I have a seasoned line producer who I have worked with before that shares the same vision for the budget as i do. I try to always use a DP who is seasoned in the genre of the film we are shooting and knows how to make his or her days. All of the actors should have plenty of rehearsal time. All of the below-the-line crew has to be very up to date on what we are trying to film on that specific day.